Baw Baw wasn't even on my race radar until last weekend. While talking to Ciaran Jones at the CV Masters Crit Champs in Castlemaine, I was inspired by his approach to racing. I couldn't come up with an excuse to tell him why I wasn't going to enter either. Von was offering to provide support. Team mate SLane had entered and had been on a rabbit diet for a few weeks. Tony Reeckman lined up as the event photographer. And as part of the VRS series there were points on offer. So I was in.

My preparation was nothing like the Tour of Bright, even though this race is tougher than any of the ToB stages. I've been focusing on boosting power output at this point in the season, not dropping the kegs to fly up hills. I haven't even stepped on the weight scales for the last month. Excuses out of the way, the 28 cassette went onto my race wheel and I cleaned my chain, at least the bike was ready to go even if I wasn't. 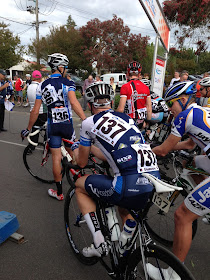 We started with a select field of 21 riders in Masters A. Looking around on the start line, too many of them were sub 65kgs and of below average height, perfect for the course. Hampton Cycles had the numbers and assigned roles. Nothing was allowed to escape off the front of the bunch in the first 30km or so before the hills started to get longer and steeper.

Damien Jones (Hampton Cycles) and Stephen Lane (Kosdown) broke off the front at around 35km in and were out of sight on the twisting rolling back roads near Neerim. With no riders swarming to the front to take up the chase, the pace was kept at a soft roar until Michael Gallagher (VIS) started unleashing all hell on the bunch. Déjà vu from Mt Buller a few weeks ago. Gallagher lifting the pace, assessing the damage, lifting the pace again. The rest of us were on the ropes, taking the punches, and stuck to his rear wheel. No real damage done, the climbs were too short to take anyone out of contention.

We got word of the lead two having 2-3 minutes advantage. With 45km of hills to go this time gap could be eaten into pretty quickly by some fresh legs in the bunch. Onto Vespers and Gallagher opened up proceedings and didn't stop. The bunch reacting, fracturing, and suffering. Near the top of the climb Gallagher and Kingston (Hampton Cycles) had a 50m gap over Paul Mason, Danny Kah (both Charter Mason), Ciaran Jones (Giant), Cameron Clamp (Bicycle Network Victoria) and myself. We were soon together again and headed through Icy Creek with no let up from Gallagher driving the front.

On the descent out of Tanjil Bren, Gallagher lost his front wheel on a hairpin and ended up with his wheels in the air and his arse on the road. Nothing too nasty, it wasn't at high speed. At this point Kah and Kingston bombed the descent while Jones, Clamp, Mason and myself took a more skin-saving approach and made sure we all descended together, upright. Through to the start of the final climb the four of us did what we could to keep the kms ticking over.

With four riders still up the road at 97km in, we hit the toll gate and were onto the final climb. The four of us exchanged compliments, good lucks, and got on with the job that is yours and yours alone. 6kms of hell. Hell on your legs, arms, back, and your mind. The climb is a battlefield. When you think it can't get any steeper, it does. When you're sure that it'll let up around the next corner, it doesn't. Getting from the "4km to go" sign to the "3km to go" sign takes a lifetime.

Within the first 200m of the climb we'd passed Lane who was cramping to the point of having to get off his bike. Not too soon after, Gallagher rose (rode) from the ashes (asphalt) and stormed past Mason, Clamp, Jones, and me. He then dangled just off the front of us for the rest of the climb. We passed a few riders with Masters A numbers on, making up one place each time. I'd lost count of where I was at. I was in a world of hurt. I just wanted get to the top.


The final 3km are a vivid blur. There was welcomed spectator support from the side of the road. There were smelly dead animals, road works, and riders from other grades in the same world of pain. I was soon in a zombie like trance, trying to block out everything that ached. Tony Reeckman caught just a small glimpse of how it feels at 100kms into a hilly race. I didn't even have enough spare energy to look sideways at this point, though I managed a thumbs up when Tony commented on my sock height.

Jones had kicked clear of me by a few seconds at the 500m to go. I rolled in 4th, 1:13 down on a sensational ride by Danny Kah for the win. I found a small patch of grass and collapsed on it. I've never had to dig that deep before in a race. No time trial I've ever done compares. I was dizzy for the next few minutes, looking skyward unable to feel gravity. I was done.


As I said above, everyone who was there has a story story about the Baw Baw Classic. If you know someone who was there, ask them about it. It is these stories from the racers and supporters that build the legend of events like this and keeps them growing into bigger and better events every year.